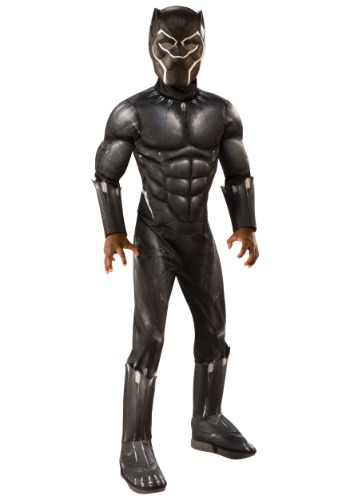 The world is full of scary villains (or at least the Marvel Cinematic Universe is). Seedy characters like Ulysses Klaue are out there stealing dangerous tech. Power hungry guys like Erik Killmonger are trying to conquer the world. And that big purple alien guy, Thanos? Well, that guy is out to destroy just about everything in the whole universe! Who can we count on during these trying times? Your child (as the newest Black Panther), of course!

The King of Wakanda has sworn to protect the Earth from any dangerous villain that might threaten humanity and if your child chooses to take on the role of Marvel’s Black Panther, he’s going to need to be prepared for anything! That means he’d better know a few martial arts moves and you may even want to scour the Earth for a little bit of the Heart-Shaped Herb to give your little hero in training! Also, he’d definitely better be equipped with a costume that makes him look like a true superhero!

This deluxe child Black Panther costume helps transform your child into the skilled superhero from the Marvel Cinematic Universe. The costume comes with a full body jumpsuit that has muscle padding in the chest and arms. It also has printed details on the exterior to make your little one look like sly commando-style superhero. Lastly, it comes with a molded mask that recreates T’Challa’s mask from the Black Panther and Avengers movies. Once your child has it on, he’ll feel like taking on Thanos mano a mano!

Of course, your little one may need a little backup if he plans on fighting against Thanos solo. We’d like to remind you that we have plenty of great Avengers costumes for adults, so you can assemble your own team of Marvel superheroes to fight against evil!