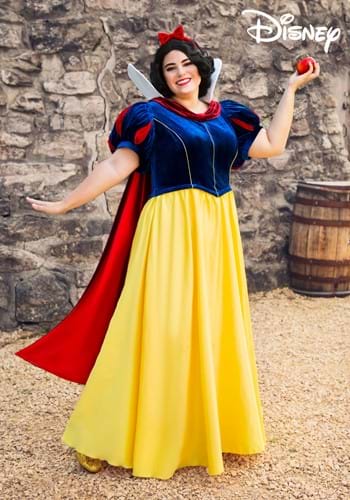 If you had to pick one fictional character to describe yourself, it’d be impossible to choose anyone but Snow White. The similarities started when at childhood—you made friends with every person, animal, and rock shockingly quick. Your voice developed with a sing-song sound. And the one thing you always wanted to do on the weekends was bake pies with your parents. As an adult, the world took notice of your fairytale charms. Any room you entered lit up! The grey gloom, musty dust, or creepy cobwebs vanished. There was no cleaning involved; humdrums just can’t exist in the face of such fun energy! Then, in those bright places, people began whistling while they worked and dancing to the silly song you sang or turned on the radio. There’s simply no denying, you’re the Snow White to life’s seven dwarfs!

Take on the appearance of your spirit-princess with this Snow White Plus Size Women’s costume from Disney's Snow White and the Seven Dwarfs. With your enchanting personality and this officially licensed costume, not even an evil queen could stop you! Slip into the yellow satin and blue velvet princess-shaped dress and you’re instantly recognizable as Disney’s first animated darling. With the coordinating red velvet and satin cape snapped into place, you’ll feel like the super princess you are. And before all is said and done, you get to crown yourself fairest of them all with the included red velvet bow-headband!