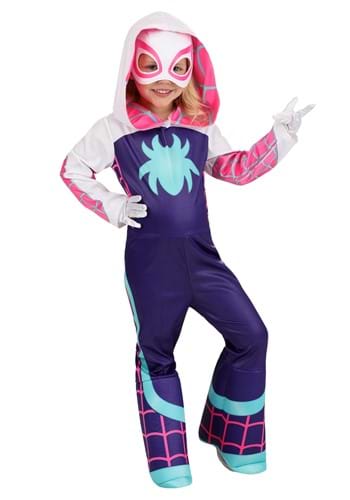 Popular! 2 have looked at this recently.

Gwen wasn't always the heroic Spider-hero that we have grown to love. She was like your everyday teenager. What has always separated her from her peers was not her grades or her sick drumming skills but her drive to help the helpless. With her father being the Chief of Police, we guess the apple doesn't far fall from the tree. With Gwen being such a great role model, this Toddler Ghost Spider Girl's Costume is perfect for those needing a superhero costume.

Did you know that Spider-Gwen, aka Ghost Spider, doesn't have the conventional superhero costume like Spider-Man and her other spider counterparts? Her suit is actually a symbiotic alien acting more like Venom than anything. It also grants her abilities and keeps her company during long stakeouts and whatnot, so that's pretty handy. We're still working the kinks out of our alien superhero costumes, so pick up this Toddler Ghost Spider Girl's Costume in the meantime.

Nowadays, you can't throw a rock without hitting a superhero in costume. That's not bad, but sometimes your kid's fancy duds can blend into a crowd versus standing out as an exemplary hero outfit should. That is why we especially love this Toddler Ghost Spider Girl's Costume. The costume's mask, sweet hood, and pink and white colors that contrasts with dark blue will guarantee your youngin' is the sharpest Ghost Spider on the block.