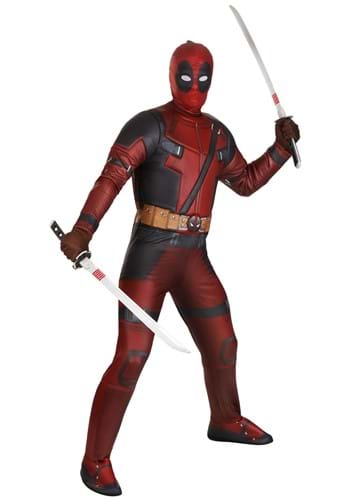 Deadpool has always had an exciting history, and that says something about a character who lives in a universe with multiple timelines. He appeared in the early 90s when the muscles were big, and the suits were weirder. Luckily, we were blessed with the Deadpool movies, and his outfit has made sleeker modifications.

Another unique skill, if you can call it that, is that he can break the 4th wall and speak directly to his audience. He does this a lot during the movies, and it was great. If you want to become the Merc with the Mouth this year, you must get your hand on this Deadpool Costume for Adults.

Fans of the comic and the hit movies will throw a metaphorical katana for this officially licensed Deadpool (don't really do that, especially with no healing factor). The costume is designed to look like Deadpool, so much so that you'll think we ripped it right out of a movie. Deadpool's iconic mask is the best part about this Qualux costume. You will have a blast cracking jokes and taking names this season. Make sure you do it in style and pick up this Deadpool Costume for Adults.