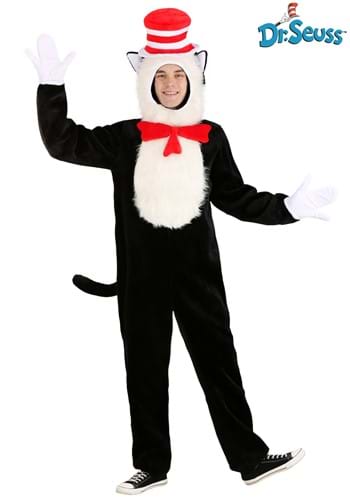 Dr. Seuss has become a towering figure in literature! His name has more influence in the world of children's books than most men would dream of. When he penned the words, "Look at me, look at me now," little did he know that although the Cat in the Hat was speaking, that sentence would apply to himself, too!

We think that phrase is one of the best literary quotes you can possibly blurt out at a Halloween party. After all, there's no better time to absorb some of that spotlight's glow than when you're in costume as one of the most famous book characters ever. However, if you're not so certain about your ability to balance a cup, some cake, a fish, and a rake on your arms, we recommend that you stick to some fun dance moves instead!

Are you ready for mischief and maybe a mess? With this costume on, you'll be sure to impress!