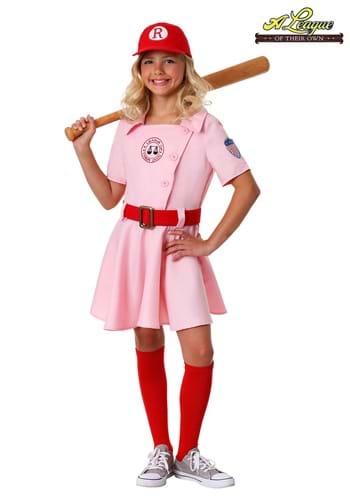 A League of Their Own Dottie Costume for Girls

TIME FOR A PEACH!

What? A delicious snack? No! We don't mean the fruit—we are talking about a Peach, as in part of the Rockford Peaches Women's Baseball League team. According to a very reliable source (the movie, A League of Their Own), when World War II rolled around, most of the men went off to fight, including most of the baseball players. How was the country to keep sane without its favorite pastime? That's where the All-American Girls Professional Baseball League came to be!

Don't let the name fool you, though. These ladies knew how to play ball and how to make it way more exciting than the guys ever could. Just an example: Dottie, the catcher for the Rockford Peaches, went and caught a ball to get a batter out, but that wasn't enough. How about doing the splits while we're at it!? Pretty fancy! And even though these ladies wore skirts, they'd run and slide and play ball with the best of them.

Maybe your kid is a hard-hitter too. A killer pitcher, catcher, or outfielder. Well, then we've got the costume for them. Our League fans are also some of our best designers and we have put together this adorable, officially licensed Dottie costume in our own Made By Us studios. This look features a pink dress, red belt, red hat, and red knee-high socks. The dress buttons up the front and features the logos that show this is a strike-out look right from the film.

Whether you know the song by heart or not, your kiddo is going to love the feel of being a part of the AAGPBL. Even if they don't want to pave the way for future female baseball players, they'll still love living out the scenes of this amazing movie!