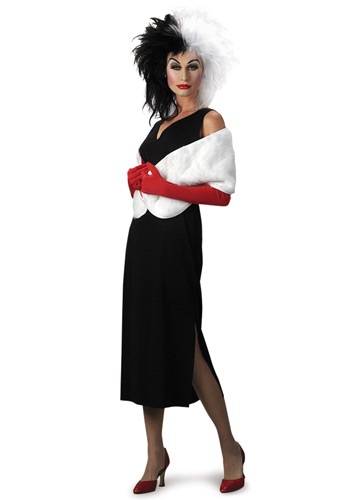 Cruella De Vil might be one of the evilest people to ever come out of a Disney movie. Now, we know that Disney has had some horrific bad guys, but just bear with us, we will explain why we feel this way! First off: She tried to kill puppies. Now, a lot of Disney bad guys have tried to harm others; actually, most have. But most of them aren't trying to hurt little defenseless puppies! She didn't even have a half decent reason, she just wanted some new clothes.

Our second reason is related to her name. Have you noticed what the name " Cruella De Vil" sounds like? Cruella sounds like cruel. Does it not? You might be thinking "That's just a coincidence." Well, look at her last name "De Vil" -devil? Anyone that has a name that sounds like cruel devil is undoubtedly VERY bad news.

This officially licensed costume will turn you into the monstrosity herself! You'll be wearing a simple black dress, with a slit down the side. We've also included the red gloves, with will go all the way to your elbows! But, more importantly, we've included the stole! The stole is made of white faux fur, so you don't have to worry if any puppies were harmed in it's making. Lastly, we are giving you the wig! The wig is an essential part of any Cruella De Vil costume, thanks to its iconic half-black half-white appearance!

It's a real shame that the only thing Cruella wanted to do with all of these puppies was make some clothing. There are so many better ways to appreciate 101 dalmatians! You could open a puppy park! People can just come in and hang out with your puppies, all day long. Now THAT sounds like a fun business venture.