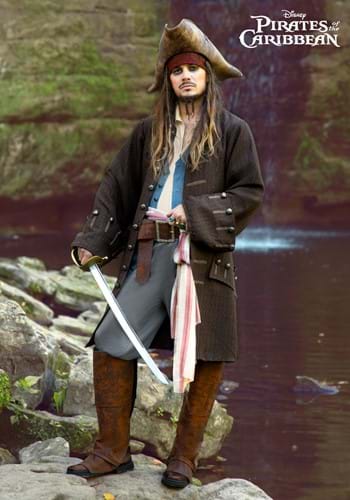 When Commodore James Norrington claims that Captain Jack Sparrow is “the worst pirate I’ve ever heard of,” Jack replies, “But you have heard of me.” A short time later, after Jack outwits the soldiers and steals the Interceptor, another officer says, “That’s got to be the best pirate I’ve ever seen.” So, who should we believe? It depends on what you think makes a good pirate. Jack is sneaky, cunning, and tries to talk his enemies down whenever possible. However, he can certainly hold his own in a sword fight as well! And although he’s generally selfish, he isn’t cruel. He tries to avoid loss of life whenever possible and has even been known to act against his own interests to help his friends. That gives him pretty high marks in our pirate book!

Whether you think he’s the worst or the best, this legendary trickster is pretty fun to imitate. Get in character with this Adult Deluxe Jack Sparrow Pirate Costume from Disney’s Pirates of the Caribbean! It includes his signature red bandana that you can wear by itself or underneath his three-cornered hat. His long coat and vest combination has silver buttons and sits nicely over the ivory shirt front. The whole top is tied together with a wide brown belt and striped sash. The pants have a comfortable elastic waistband and the costume is completed with boot tops which enable you to wear your own brown shoes. You’ll love to wear this deluxe costume on all your swashbuckling adventures!