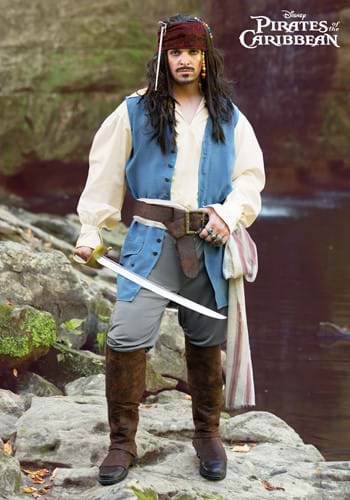 Jack Sparrow always protests when “Captain” is left off his name. Sometimes other characters will point out that he doesn’t have a ship at the moment, but we don’t think that should matter. After all, just because a doctor isn’t currently standing in a hospital room doesn’t mean they’re no longer a doctor. However, Jack never protests when he is called a pirate! He constantly proves that he is one as he hunts for several different types of treasure and lies and steals to get what he wants. However, he does try to follow the Pirate’s Code, and he believes that a pirate can still be a good person. We’ll leave it to you to decide whether or not Jack counts as one of them!

Even when Jack is without his hat, he still looks like a pirate captain to us! Now you can look like one too with this Adult Captain Jack Sparrow Costume from Disney’s Pirates of the Caribbean. It starts with Jack’s signature billowy white shirt and blue vest, which is tied together by a wide brown belt. The red-striped sash can be tied around your waist, the belt itself, or wherever you think it will have the most dramatic effect. The relaxed grey pants fit nicely into the brown boot tops that allow you to make any pair of brown shoes look like a knee-high boot. The last piece is Jack’s iconic red bandana. With this ensemble, you’re sure to feel like searching for treasure!