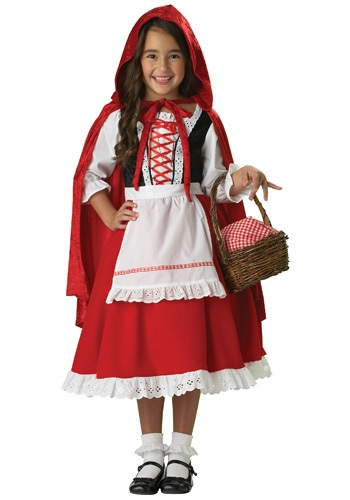 Poor Little Red Riding Hood. If we had had to go through what she did, we would have some serious trust issues. Thinking your talking to your grandma, but it's really a wolf? That's the kind of mistake that you have to ask yourself: Should I have noticed this sooner? When grandmother's voice is way too deep, when she has a massive mouth full of massive teeth, AND facial hair, you have to admit that maybe this is something that Little Red could have noticed sooner.

But, it's in the past now. And since it's just a fairy tale, it's probably not worth stressing about now. But that doesn't mean that we won't be staying a little distant from grandma when we go over for Thanksgiving. You can never be too careful! We will just throw a stick, and if our grandma doesn't try to fetch it, she probably isn't a wolf.

This costume will turn you into Little Red Riding Hood; one of the oldest and most popular fairy tale characters of all time! You'll be wearing a dress that is styled to look like a laced vest over a blouse. Over this, you'll be wearing the apron that you see in the image. And, we've saved the best for last! The hooded cape is bright red and fastens around the neck with fabric ties. All you'll need is a picnic basket and the costume will be complete.

People have probably tried to rewrite the story so that Little Red notices that it's not her grandma right away. The problem is, they don't stick. You know why? It's just not as good of a story if Little Red Riding Hood walks in, sees a wolf in her grandma's nightcap, and walks out. It's just not much of a story!