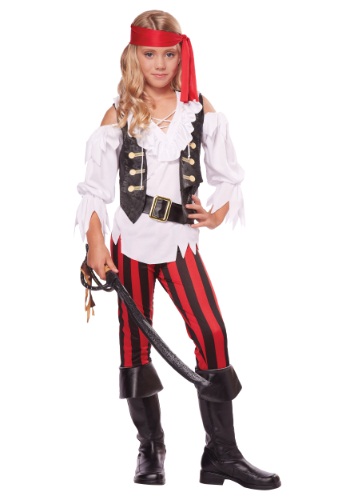 This costume will have you looking like the best-dressed pirate on the seven seas. Unfortunately, they aren't exactly the most organized group of folks, so you probably won't be able to enter any competitions to show off your fancy garb, but still, just knowing you're the best dressed will be prize enough.

Know what would be cool? It would be cool to see a pirate Olympics. Except instead of the regular events, they could do stuff like plank diving and mast climbing and sword fighting, and boat races! Wouldn't that be fun to watch? The only problem would be trying to organize the pirates. Pirates by nature don't tend to respond well to authority, so anyone trying to organize them for this Olympic game is in for a really bad time. Still, if someone could get it done, we would love to watch.

This costume is so real, there is a decent chance you startle the neighbors! The vest and shirt come attached as one piece, and the shirt comes with some ragged edges, probably from your rough days at sea. You'll also be wearing a belt, which would be a good place to hang your sheath for your sword or a holster for your gun. You'll be wearing black and red striped pants and these boot toppers, which can turn any pair of shoes into seafaring ones! Last but not least, we have included the head tie to match the pants!

You know what you need now? A parrot? Someone to repeat all of your orders and back you up in a conversation. Your parrot will always have your back because they are just going to copy what you say! They are the ultimate second mate. Good luck out there matey!