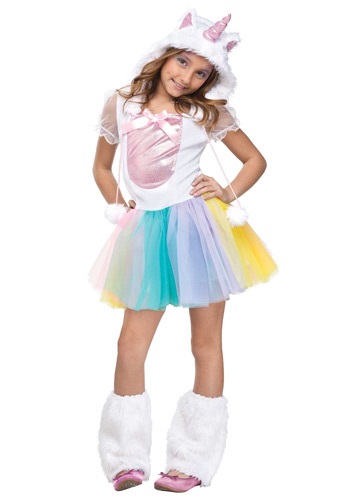 We know unicorns don’t live on rainbows (though that does sound like the beginning to a cool young adult novel). But for some reason, whenever we see a rainbow, we can’t help but think about unicorns, as well. Maybe because unicorns are bright and shiny and have some sort of uplifting sentiment about them, just like a rainbow after a storm...we don’t know. But we’re thinking that your little girl probably has the same thought process. Especially since all of her notebook drawings are of rainbows and unicorns and pretty much only those two things. So do her a favor and pick up this Girls Unicorn Costume and let her experience the shiny joy of her favorite mythical creature.

In this look, she'll have so much fun chasing down rainbows at the end of every rainy day, or bringing light into dark rooms when the power goes out during a particularly rough thunderstorm. It’s up to her how she wants to illuminate in this costume!

Let's be honest: this outfit is probably as close as we can come to putting an actual rainbow into costume format (but don't quote us on that). It features a white flannel bodice with a metallic belly and white puffed sleeves. The tutu skirt has a satin base layer overlaid with transparent vertical rainbow colored stripes (pink, turquoise, lavender, and yellow)! The flannel hood has fur edging and tassels, as well as soft-sculpted ears and the all important single unicorn horn. Also included are white fur boot covers. She won’t need to accessorize this look any further, as your little girl will bring all the spunk and vivacity it requires!

So feel free to look forward to those rainstorms as they come, because that’s when your daughter gets to shine in her favorite costume. She gets to be an actual unicorn (or as close as she can get) that brings joy, light, and rainbows—and that sounds pretty magical to us. Worth getting rained on, that's for sure!