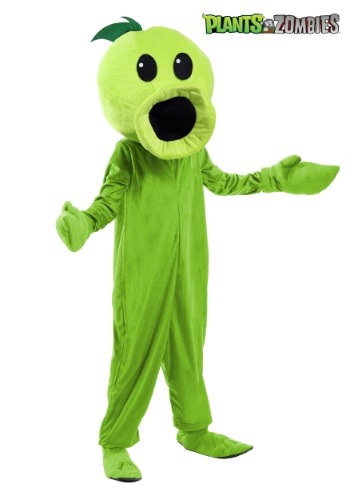 Finally, a useful plant! People plant flowers on their windowsills because they're pretty, or they plant trees for shade. All of those things are nice, but what do we really want? We want a plant that can protect us from a zombie attack! Yep. You read that right. We want a plant that can stop a zombie attack. That's why these little peashooters are the best plant on the planet. Given the choice between a peashooter and a guard dog, we would rather have the pea shooter, no doubt.

That's why these little guys make such a great costume. They are positively bad to the bone. So if anyone ever says to you "You went as a plant for Halloween?" You just look them right in the eyes and say "I stop zombies for a living, what does your costume do?" Yeah, that'll stop them real quick.

This Plants Vs. Zombies Kid's Peashooter Costume is really quite impressive! The headpiece is padded for shaping, and the mouth of the peashooter is covered with mesh for vision. The jumpsuit is easy to wear and simply zips up with the zipper on the back, which makes for an easy and secure costume. The final touches on this costume are the mittens and foot covers, which are shaped like leaves. It's these little details that really make this costume great. Oh, and the fact that it's officially licensed, meaning that you will be wearing the real deal.

So, obviously, we don't condone any kind of horseplay on Halloween night. But, if, hypothetically, you were to go ding dong ditching or something of that nature, this tip might come in handy. If you were out in someone's yard, trying to hide from someone, well, just remember; You're a plant! So sit still, and be the pea shooter you set out to be. Give it a try, let us know how it works!