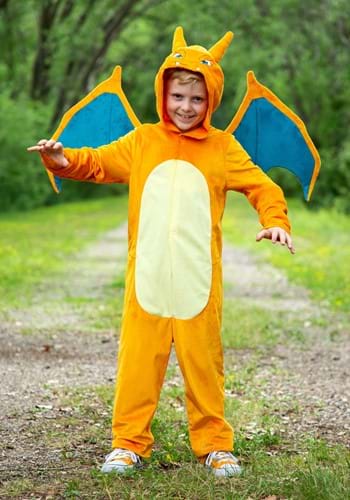 Popular! 4 have looked at this recently.
Better hurry.
This sold 15 times in the last 48 hours.

Soaring over the rich plains and forests of the Kanto region, you lock in on a kid travelling with his rat far below you. Even though he captured you a while back and you have traveled with him for a long time now, you still scoff at his commands. He isn’t important enough to tell you what to do!

But that doesn’t mean you would let him suffer overmuch either. Now that he is locked in combat with some tough-looking gangsters, you use flame and soar down to his aid! At just the right moment, your roar a plume of fire into the midst of the battle, burning the Koffing and Ekans that were cornering him. Not today! No one bullies your trainer while you are still around!

Fighting for the honor and fame of your trainer may not mean a lot to you, but you can at least look awesome when you put on your Pokémon Child Charizard Deluxe Costume! This cool costume consists of a one-piece jumpsuit with attached wings and a hood that has the eyes, horns, and fangs of a real Charizard. You will be warm and cozy as a dragon in a lava pit when you wear this costume. The accurate colors and style of this costume would make any PokéFan happy!

If you are looking for the perfect Charizard costume for your kids, then this is the one for you. They will love running around being the best, and you will love seeing it. Just make sure you point them toward some of the harder gyms!