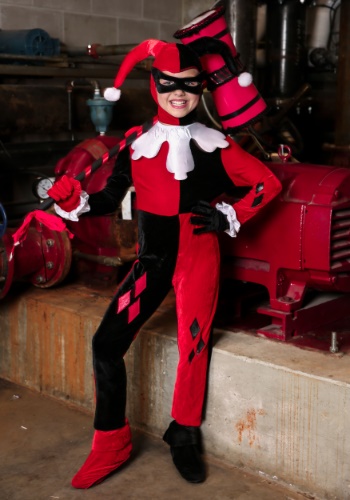 We totally have a soft spot for Harley Quinn.

Why you ask? Well, let us fill you in. Harley Quinn is the Joker's main squeeze. Despite being typically found on the wrong side of the law, this girl does have her nice streaks. Not only that, but she has killer taste in flashy outfits and color combinations, she's super sweet (especially if she likes you), super sassy, and very silly. Really, who else do you know that cartwheel across a room while cracking a joke? Also, did we mention she has pet hyenas? That's right, hyenas. This girl is a bit different, but we totally admire her spunk.

You know, originally, Harley was Doctor Harleen Quinzel, Doctor of Psychiatry (before she fell in love with the Joker and joined him on his crime sprees). That means she's smart too. Although, her judgement's a bit clouded since she's been hanging out with Mr. J... at least she's still got her killer gymnast skills! She's also been known to hang out with Poison Ivy, which is pretty awesome.

So if your kid is a spunky silly one (who occasionally gets into trouble), maybe they need to show off their true colors with this Harley Quinn Jumpsuit Costume. It has the classic red and black spandex jumpsuit with diamond patterns. There's also a white foam collar, satin cuffs, a stretchy harlequin headpiece, boot covers, gloves, and an eye mask to boot. Your kid will be ready to crack a joke, fire a cork gun, and laugh hysterically all at once. We cannot, however, condone getting hyenas. That's just a bad move. Leave that crazy decision for the actual Harley.