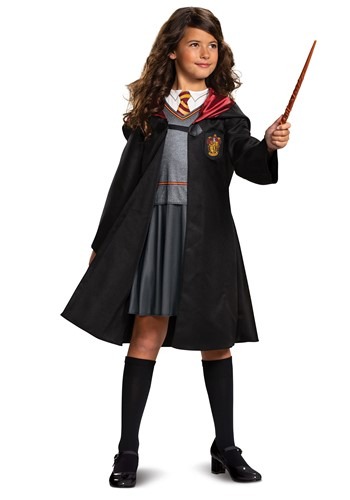 Hermione has been at the top of the spell casting game since day one when she happened by Ron and Harry's train car and fixed Harry's specs with an "Oculus Repairo". Her wand ready nature has literally saved the trio of friends countless times in their years at Hogwarts from when they went searching for the Sorcerer's Stone in their first year to finding all of Voldermort's Horcruxes as a confident teen. Then there's the time she used her skills to stand up for herself when Ron went way too far and sicked a flock of birds on him with the "Avis" charm. And boy oh boy, was it a good thing that she jinxed the Dumbledore's Army roster to tell on anyone who told Umbridge about the club, because they really needed to know who they could trust!

This pull-over set of Gryffindor robes will instantly transform your kiddo into a Hogwarts student! The robes are attached to the dress front with a pleated skirt and sweater top. It secures in back to that your child can be ready for Halloween revelry the instant that they're home from school! the officially licensed Hermione costume is completed with a Gryffindor patch so that you can be sure everyone knows that she's lion brave!

For better or worse, for one or for all, Hermione has been a natural charmer since she got the Hogwarts letter (and probably before!) Are you ready to see your little charmer step into her robes? This costume can be complemented with knee-high socks, a Gryffindor scarf, and of course, a wand. Because while your little one may just be starting her magical career, if she's dressed as Hermione, you can be sure that she'll be charming on day one!