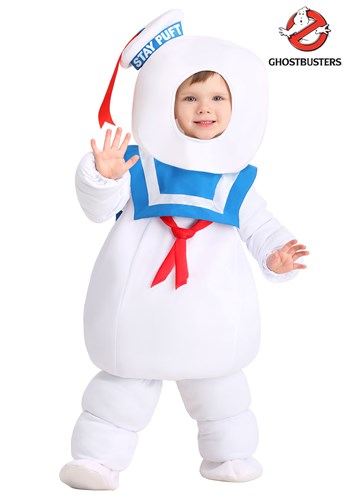 What Did You Do, Ray?

He seemed so harmless. After all, he's made of marshmallows, so it's pretty easy to see why Ray might imagine him! How much damage could he even do? Well, it turns out... sort of a lot! The Ghostbusters are barely able to stop his rampage in the 1984 film! Of course, in the end, the ragtag group of heroes does end up defeating Gozer the Gozerian, but it was a pretty close call. It's probably a good thing Ray didn't think of something even scarier than this soft and fluffy dude!

We recommend that don't try summoning a giant monster to your neighborhood just to get Stay Puft to join your Ghostbusters group costume. The team was able to get him under control last time, but who knows how much havoc he could cause this time around! Instead, employ the help of your little one! Your toddler will look adorable "terrorizing" the neighborhood in this Ghostbusters Stay costume!

Based on the iconic movie villain, this Ghostbusters Stay Puft Costume is a toddler-sized outfit, perfect for your little one. The costume comes with a bubble bodysuit, which mimics the look of Stay Puft's marshmallowy body from the movie. It even comes with a sailor-style bib on top and a red neckerchief. The head is shaped like the Marshmallow Man's head and features a generous opening in the front for your child's face. It even has a little hat attached to the top! Finally, the legs feature the same puffy style to give your child a complete look.

If you're trying to perfect your family Ghostbusters group costume, then this Toddler Stay Puft Costume is the best way to finish out the look! With an adorable look straight from the movie, your little one might even steal the show this year!