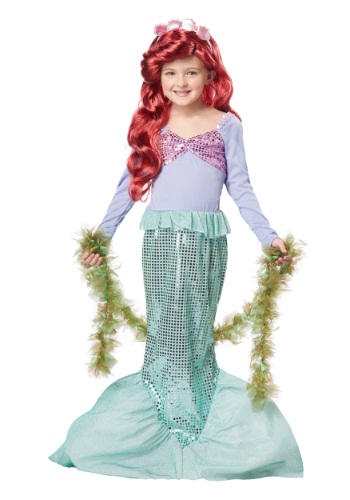 DO YOU BELIEVE IN MERMAIDS?

Do you believe in mermaids? Yes? No? Maybe you're undecided. Well, we will be the first to admit that we don't know what to think. The idea of someone with a back fin instead of legs seems a little far-fetched, but maybe that's why it could be true! If it was only a little ridiculous then people might have just made it up. But a HUMAN with FINS that lives at the bottom of the sea? Well, that's just the craziest thing we have ever heard. Just so crazy that we don't think anyone could have ever made it up. They had to get the idea from somewhere!

And if they had to get the idea from somewhere then who is to say that they didn't get it from their own two eyes when they saw a mermaid? It certainly seems like the easiest way to come up with such a wild tale!

This costume will turn your little one into a mystical mermaid! They'll be wearing a dress and a headband to complete their mermaid effect. The dress is pink on top and turquoise on the bottoms, and the bottom of the dress is styled to look like a mermaid's tail! It's decorated with sequins and stitching and the top is the same way! They match with the headband perfectly. The headband is covered in pink foam seashells and is exactly what we'd picture a mermaid princess wearing.

What will you do with all of your free time when your daughter moves off into the big blue sea? You'll be empty nesters! That's a lot of free time... Maybe you should use it to get yourself a mermaid tail so that you can visit your daughter on the holidays?