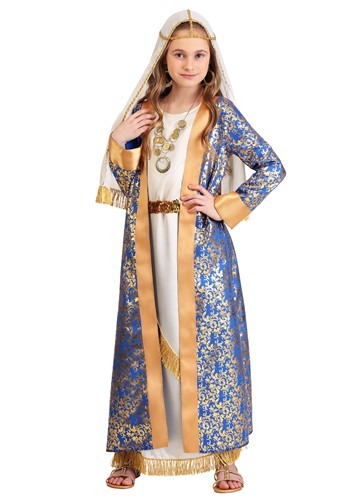 Better Than Any Fairy Tale

She was an orphan with a glorious destiny. Alone in the world except for a devoted uncle, she was chosen from the other young women of ancient Persia for a contest unlike any other. She won the favor of a dangerous king and became the queen of a land where her people were oppressed and afraid. And when an enemy tried to destroy them for good, wiping them from every province of the kingdom, she braved possible death and faced her people's persecutor in an epic act of courage that's still celebrated every year by a joyful festival. Sounds like a superhero origin story or a really early Cinderella tale, doesn't it? Queen Esther's history still inspires new tales today!

Step into your destiny and show your spirit in this exclusive Girls Queen Esther Costume! The blue gabardine robe is printed all over with a royally gorgeous metallic gold scroll print and is edged with satin edging fit for a queen. The ivory satin dress panel and has golden fringe on the wrapped hem and a sparkly golden-toned sequined belt. A lightweight ivory chiffon veil with matching gold fringe detail hangs from a dainty gold braid crown and will flutter gracefully with your every movement.

A Heroine for the Ages

When we talk about strong girl leaders, we sometimes forget that we can take inspiration from the ones who have come before us. Queen Esther prevailed in a time when everything seemed to be against her. Wearing her costume pays tribute to your own inner strength!