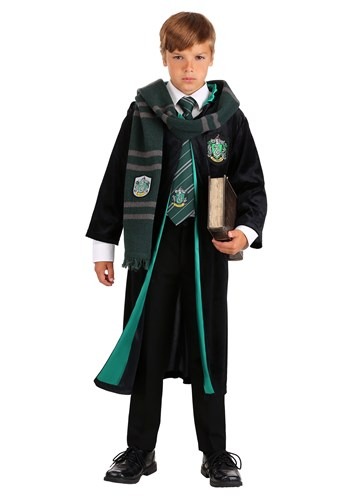 Slytherins get a bad rap. Sure, the Hogwarts house has turned out its fair share of dark witches and wizards. But, have you ever really given thought to the traits that distinguish Slytherins from the rest of Hogwarts’ students? Being cunning means you’re willing to achieve your goals through evasion or deceit, which could clearly become dangerous, but deceit and evasion are not inherently bad. No one has ever looked at their child and been disappointed that they’re ambitious and resourceful. And how could anyone be upset at the idea that another person holds fast to the idea of fraternity? Simply put: Slytherins deserve better than to fight the lingering feelings of unrest left behind by alumni such as Voldemort.

We’re hoping your child is up for the task! If they’ve ever expressed interest in gaining recognition for great accomplishments or found a way around chores that you could only be impressed by, they may just have what it takes. Give them the tools they need to change the image of Slytherin with their own school robe!

Slytherin house is ready for a facelift! Let your kiddo work their magic for the noble house with this Deluxe Slytherin Robe for children! Dressed in the deep-black velour robe, they’ll look as sleek as the Slytherin serpent embroidered on the robe’s front panel. As they pass through the halls of Hogwarts school, the emerald green satin lining will draw everyone’s attention—meaning they’ll have every opportunity to show the merits of a Slytherin student. And should they find themselves vigorously debating the standout qualities of each house with another or putting a less chivalrous student in their place, their robe will stay secured with the button and loop closure.

Whether your child wants to make waves as a Slytherin student or they’re simply joining their other Hogwarts friends for some Halloween festivities, this stunning Slytherin robe is ready for their magical adventures!