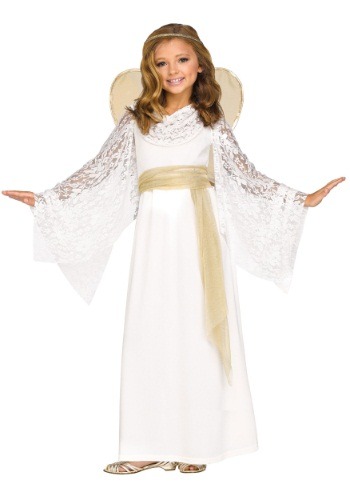 Did you know that most angels described in original texts were either a person covered in wings (even over their bodies and faces) or just a set of eyes, covered by wings, which were again covered in eyes? It’s not uh...exactly what we imagined either. Sure, there are some angels that are more similar to people, who sing songs and such and aren’t covered in eyes (shudder), but those are less common. We’re thinking that when you think of your little one as an "angel," you’re probably thinking of the second one we described. The more human one. If that is the case, we have this great Child Angelic Maiden Costume all set to go for you. If it’s not the case, we’re sorry, we don’t have a set of all eyes and wings costume-ready quite yet.

Anyway, your little one sings in perfect key and can play a rippin’ harp solo, right? Yeah, then she’ll feel right at home in this divine look. Everyone will appreciate her talent and pure harmonization as she works her way through the hymns of the day.

This great look is great for all manner of holidays and events. Just don’t forget to bring her harp along. We suggest a smaller portable one (those large harps are notoriously difficult to get around). Anyway, the dress has a lace scoop in front and open drape lace sleeves to allow for free hand movements. The wings have a wire frame and lace applique with elastic straps for ease of wear. And finally, the headband is made from metallic gold trim with elastic in the back for comfort.

In this wonderful outfit, your little one will look like she belongs alongside the host of human-resembling angels singing songs all day long. Meanwhile, we’ll get to work on some of those other angel costumes. We think they could be a lot of fun to create!