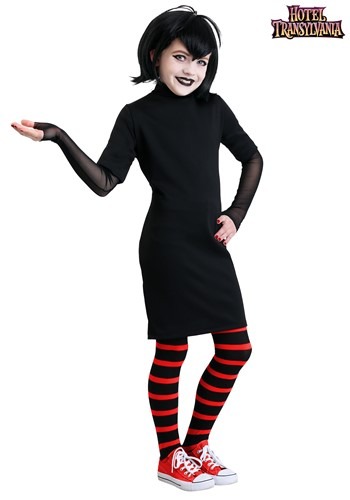 Your kiddo has probably been anxiously awaiting some cool powers for several years, now. (We understand that your tyke might have only been around for that many years but, honestly, when we think of how long we have been wanting powers to show up, it is easily our whole lives... give or take a couple of months.) So, it's only (un)natural that your little one has had it up to a foot over her head with waiting! Where are those dang vamp fangs!?

Unfortunately, the natural growth of those powers is something that is entirely out of our control. In fact, according to Papa Dracula, some kiddos won't even grow them at all! (That's just tragic!) Fortunately, we've got a couple of ideas about how we can provoke them to show up. First is candy. Obviously. Eating candy means your kiddo needs to brush her teeth and tooth brushing almost certainly tells the vampire fangs that a kid is ready for the responsibility!

The second method is just dressing for the part! With our officially licensed Mavis costume from Hotel Transylvania, your tyke can become the coolest vampire tyke that ever earned her fangs. This Made by Us look starts with a dark black, knee-length dress. The next step is a pair of horizontally striped black and red tights, just like the character from the film! The frazzled hair of Mavis comes in the form of a black styled wig. All these things combined make for a replica of our favorite young Dracula!

Everyone knows that vampire powers come along with vampire fangs. And there is that whole power and responsibility thing. So, tell your tykes to brush their teeth to prove they are ready for this Mavis look. (Vampire powers and fangs not actually included.)