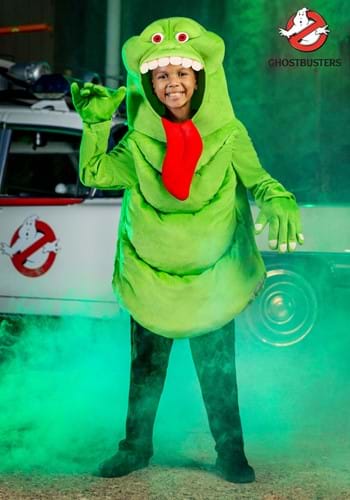 Tons of people want to dress up like a Ghostbuster. After all, Venkman, Stantz, Spengler, and Zeddemore are the clear heroes of the 1984 film, so it's pretty natural that most kids would be into that. But what about the kids who LOVE slime. You know, the kids who like gross stuff just a little too much? Well, those kids are probably little more into dressing up like their hero, Slimer. The green blob gets to wander around a hotel, making weird smells and spreading a trail of ectoplasmic goo all over the place. They even get to scare unsuspecting guests whenever they feel like it!

Yes, some kids would much rather be a slimy ghost over a Ghostbuster... and we're happy to oblige those sorts of kids. If we're being quite honest, we were one of the slime kids when we were young, so making this Kid's Ghostbusters Slimer Costume was pretty natural.

Our costume designers wanted to capture a look that does the blob-esque character justice! This officially licensed costume comes with a pullover style tunic that has plenty of fiberfill stuffing in the interior. It also features an attached hood, which has a plastic arch top to help it keep the rounded shape.  The front is designed to look like Slimer's face, complete with a pair of beady red eyes! The face has a mesh section for your child's face. Finally, the costume comes with a pair of gloves. Put it all together and your child will be ready to head to the Sedgewick Hotel to cause a little bit of mayhem.

If you're looking to bring the Ghostbusters movie to life, then nothing beats this Kid's Slimer Costume! Be sure to check out all of our licensed costumes from the movie to turn the whole family into characters from the film.