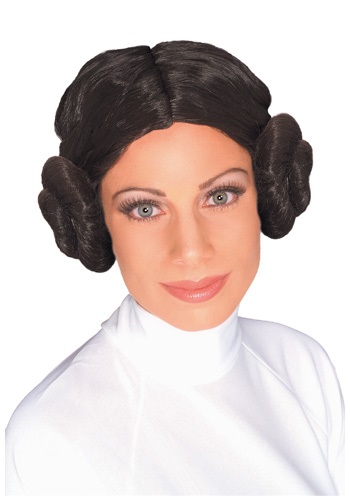 The origin of Princess Leia’s iconic hairstyle is interesting. According to Star Wars Costumes: The Original Trilogy, the famous “cinnamon bun” hairdo doesn’t appear in any of the concept artwork for the original film. However, George Lucas said that he drew inspiration for Leia’s look from the hairstyles favored by Mexican female revolutionaries in the early 1900s. Hard to imagine, that the princess of Alderaan and ladies from turn-of-the-century Mexico might rock the same do, but they were both in similar situations. We suppose Leia’s hair was a little more intricately woven than her models could have managed, but an Alderaan princess without cinnamon bun hair is a lamentable notion.

Our Princess Leia Wig is an absolute must-have for anyone dressing as Princess Leia. The perfect buns on either side of this piece will remain coiled and secure, letting you avoid an embarrassing unravel during a laser fight or run-in with a trash compactor monster. The wig fits securely thanks to its mesh lining, and its sturdy synthetic hair is resistant to damage from the sun. There are a lot of princesses out there -- not many space princess, though, and certainly only one Princess Leia. Style accordingly!