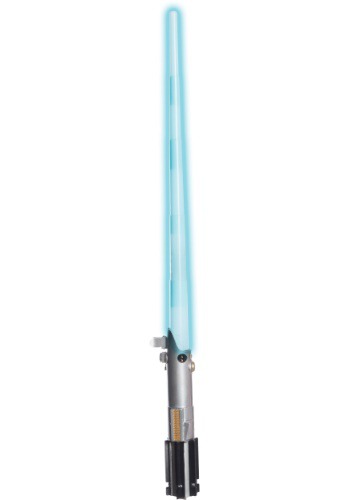 Rey, girl, you’re living the dream. You rose up from being just an overworked salvager in a rinky-dink little desert planet, to becoming a fledgling force user who could wield a lightsaber well enough to fend off Kylo Ren. She hung out with Han Solo on the Millennium Falcon and now she’s best pals with Chewbacca. We wish we had that sort of good fortune, but until we can just accidently bump into Han Solo and Luke to go on our own Star Wars adventure, we’ll just have to stick to playing with this Rey lightsaber, which is licensed form The Force Awakens.

This toy lightsaber is the bees knees, or perhaps the Hutt’s… uh, what do Hutt’s have again? It’s fully collapsible, it lights up and you can swing it around without having any training in the Force. It’s perfect for anyone planning to dress up like Jedi, or anyone who’s just tired of waving around a flashlight while pretending that it’s a lightsaber.