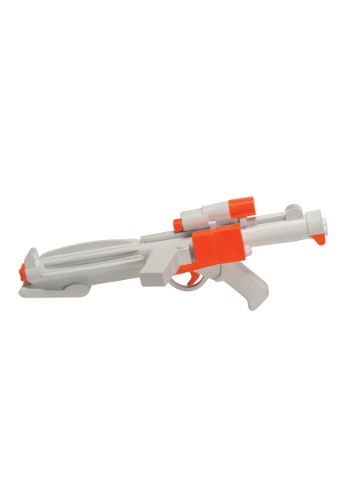 We do not too often encounter space faring warriors in our own galaxy. That stuff is generally restricted to not only galaxies far, far away, but also quite a long time ago. But, still, we have tons of legends about Imperial troopers, the terror they can wield, the clones they sometimes are, and, of course, all sorts of stories about the effectiveness of their blaster fire. The fact that they’re aligned with a dark Empire, aiming to control the entire galaxy through Dark Side rule is pretty frightening, but the look of a faceless warrior with a weapon pointed at you is quite a bit more!

Of course, it’s a good deal less scary when you have your own Star Wars Stormtrooper Blaster at your side. This officially licensed molded plastic blaster is gray and orange like the iconic weapons you’re used to and will serve as the perfect complement to any look, whether you’re part of the Empire, the Rebels, a neutral scoundrel, or just looking to accentuate your business casual look with some space opera flare. Fear not, though. You won’t harm anyone with the weapon. After all, the Stormtroopers aim wasn’t the only reason they never hit anything!