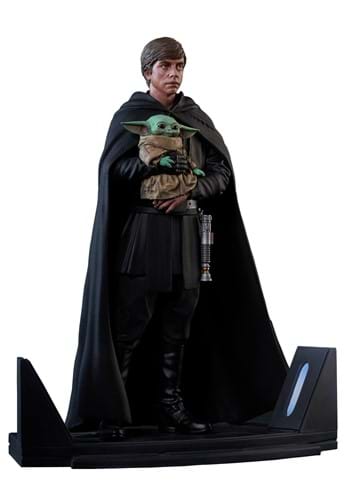 The Cavalry Has Come

That's right. He might just be one lone Jedi, but he's come just in the nick of time. He completed the training. He redeemed his father from the depths of the Dark Side. He rescued The Child from unbeatable odds. Now, he's bringing his expertise to your Star Wars collection.

This Star Wars Mandalorian Luke Skywalker and Grogu Statue is a Premiere Collection piece that can save any collection from the tyranny of Moff Gideon (or any other villain for that matter). It's a 1:7 scale statue with stunning detail, including intricate sculpting, realistic texturing, and an amazing paint job. The statue captures the moment from the final episode of The Mandalorian, Season 2, when Luke takes Grogu with him to learn the ways of the Jedi. They come on a black base, which is modeled after the interior of the Imperial shuttle where the final battle against Moff Gideon occurred. Limited to only 3,000 pieces, this statue comes packaged in a brilliant box, perfect displaying. Finally, it comes with a hand-numbered certificate of authenticity as proof of it's limited collectibility.