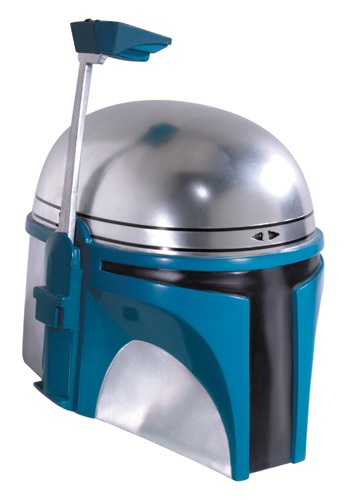 Jango Fett is the ultimate cool guy of the Star Wars universe. This unspeaking bounty hunter is the very definition of the “strong, silent type.” He only has a few lines in the whole series, if we don’t include a yell when he falls into the…

Oh, wait. We were thinking of Boba Fett. Sorry.

Jango Fett is… well, he’s pretty cool, too. He’s sort of exactly like Boba Fett, so you can excuse us for mixing the two up. See, Boba is his clone. Jango’s own story isn’t all that exciting, but his legacy lives on—literally—in all the Stormtroopers who were cloned from him. He’s pretty much the father of the Empire, in a way. We’re not what that means for Boba Fett. Does he have millions of siblings running around the universe? Imagine the family reunions… and the Christmas shopping lists!

If you think Jango is as cool as we do, check out this Ultimate Jango Fett Helmet. This officially licensed rotocast vinyl helmet is molded to look just like Jango’s helmet. It’s perfect for a costume party or just to use as a decorative accessory around the house. It's sure to cap off any Star Wars collection!