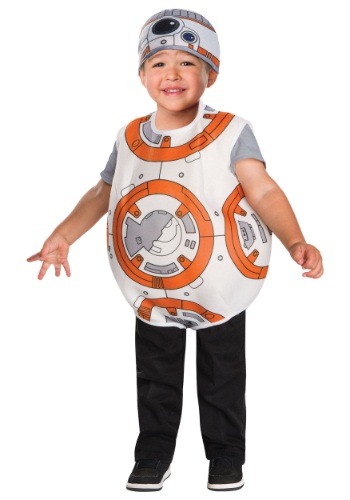 For years, we were watching a galaxy far, far away from ourselves and adoring the beep-and-whirring of the universe’s most adorable droid:  R2D2.  Artoo would zip around on his tracks and, for some reason that many of us would never totally understand, we would just watch with that impossible combination of awe and aww at the smart and somehow sassy droid.  But, it has been many years since Artoo and C-Threepio were helping to keep the Rebels safe and it seems pretty unlikely that we’ll see his shining blue dome again any time soon.

As sad as that fact may be, we can take some solace in the fact that Rey has come upon a bright new friend that is somehow even more adorable.  (Yeah, we know that Beebee-Ate technically showed up with Poe Dameron, but there’s an instant connection between the Beebs and Rey that can’t be denied!)  Between his two spinning orbs and his similarly inquisitive mannerisms, Beebee-Ate is going to make some strong competition for the galaxy’s favorite droid.  Only time will tell!

Though, there is one way that you can turn an already cute droid into the perfect definition of adorable and you can see him running around in your house all at the same time.  Invest in this officially licensed Star Wars Toddler BB-8 Costume and watch that important secret mission turn into one that you’re going to want to share with everyone.  The sleeveless satin romper fastens comfortably with Hook and Loop fastener and has printing all over to give the perfect droid look and even offers secret access panels in the rear in case your little droid needs a potty break.  There are a number of eternal R2D2 fans out there, but we’re sure they’ll be convinced in no time!