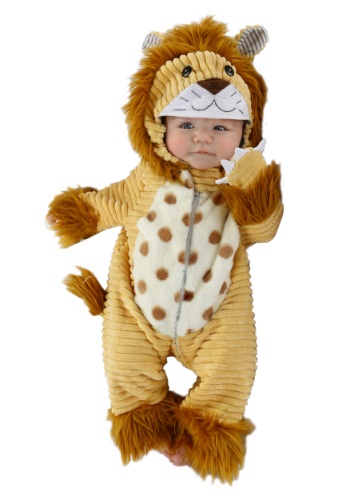 Lions are scary animals. They rank second on the list of Safari animals that we really don't want to run into in the wild. If you were curious, the first place winner is actually a hippo, which we've heard are incredibly aggressive and territorial. But second is still pretty high on the list. If a lion decided to make us its lunch, well we aren't really sure that we would be able to tell them no. Not that we wouldn't try, we just don't think the lion would be all that inclined to listen.

But seeing a lion while on a safari would be amazing! From the safety of our tour jeep, we could easily appreciate the strength and ferocity that lions possess. Their majestic manes are very possibly the best hairdo in the history of hair, and that's saying something! Something tells us that we couldn't rock the look, though.

This costume will turn your infant into the least intimidating lion we have ever seen, and we mean that in the nicest way possible! They'll be wearing a jumpsuit that's styled to look just like a lion! It's tan white a lighter colored belly covered in spots. It has faux fur over the ankles and wrists, and of course, a tail on the back. Last but not least, the hood they will be wearing turns their head into the face of a lion, complete with ears, eyes and a nose. All they will need now is a pride to travel with!

A LION NEEDS A PRIDE

A Lion needs a pride. They aren't solitary animals, they need a family! That's why we were thinking this costume might make a great group costume. Dress up as a lion with your little one and become the cutest pride on the savannah!