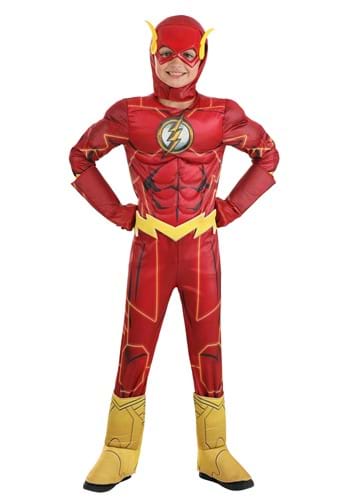 Not a Chore at All

The worst part about Saturdays growing up was always the chores that you had to do. Having four siblings meant that there was plenty of leftover mess after a week of school, sports, and projects leaving their marks all around the house. That’s why you always hoped and prayed for the ability to your chores and still have time to hang out with your friends.

Well, the day you put on that Flash costume was the day you able to get them all done! You took out the trash, loaded the dishwasher, and vacuumed all the floors in fifteen minutes flat! Maybe it was the fact that you didn’t stop to grumble and pout, but maybe it was the magic of the costume after all. Whatever it was, you can safely say that the Flash made it happen!

A Modern Take on a Vintage Classic

Even though his costume has had a lot of iterations over the years, there can be no doubt that the modern costume is the coolest! This Flash Deluxe Kids Costume is the perfect way to show your love and knowledge of the Flash. Its Flash emblem is front and center on the officially licensed costume, which has all the details to make you think the Flash himself is in the room. The jumpsuit has built in muscles and the costume also comes with the belt and hat.

If you are looking for the perfect modern Flash costume for your child, then this is the one for you. Though they might not actually do their chores any faster, at least they will feel like they are speed incarnate!