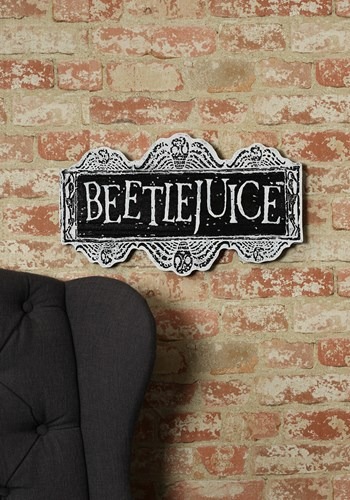 Ain't no party like a Beetlejuice party cause a Beetlejuice don't stop! No, really. It's almost impossible to make this guy go away. We invited him to our company Halloween party a few years back and there he was, smelling to high heaven (or Neitherworld) and making everyone lip sync to "Day-O". Sure, it was actually pretty fun but after a while, everyone was ready to go home and he wouldn't stop his mischief until we threatened him with a sandworm.

So, if you want to invite Beetlejuice to your party we wouldn't blame you. This dashing seasonal sign will look splendid on your wall in either case. The lightweight foam has an aged stone look as if it was something you discovered in the attic of a dusty Victorian house you just moved into. Skulls and skeletons border the aged looking lettering to make the spooky sign complete. By all means, hang this sign up in this house. Just think twice about saying this ghoul's name three times!