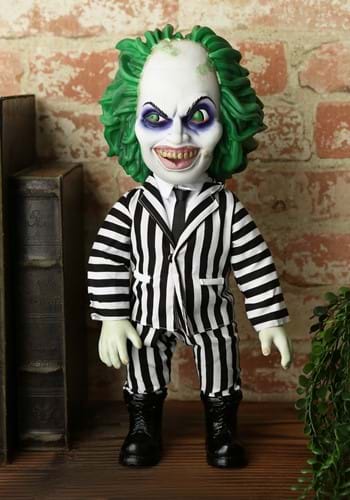 The juice is on

...now let's see what shakes loose! There's one cool ghoul that stands above the rest, and that's Betelgeuse also known as Beetlejuice. You never know what this guy is gonna get up to next. Will he stretch his face to scare you outta your skin? Will he try and propose to you so that he can stay in the land of the living? Sure, sometimes he gets his head-shrunk for his offensive behavior but he always bounces back, no matter the situation!

This talking Beetlejuice doll from Mezco embraces Betelgeuse's gritty, grotesque, and weirdly charming personality. Standing 15 inches tall, the figure has a highly animated and detailed face with wild green hair, a grizzled, greenish grin, and an expression that's fifty-percent mischief and fifty-percent madness. Press the button on his back back and hear him say seven phrases from the film such as, "I'm the ghost with the most" and "You gotta say my name three times."

This doll has 11 points of articulation so that you can pose him just so. His box has a large window display, making this Beetlejuice figure a great addition to any horror or cult-classic fans display! Give this guy a squeeze and enjoy his manic presence, just be careful and refrain from repeating his name three times!