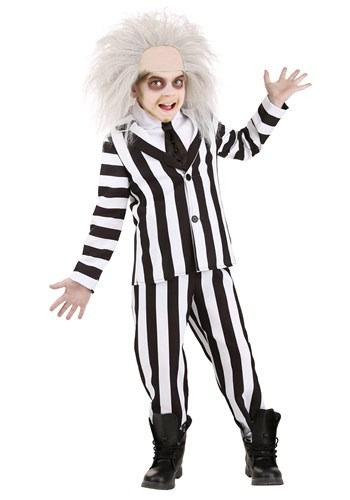 Scaring Your Guests the Beetlejuice Way!

He's rude and kind of crude, but he'll make sure that everyone in your home is running away in terror. And if your child wants to scare the living daylights out of your house, then this classic costume from Beetlejuice is going to be the outfit he needs! You don't even need to say the name three times or make any weird deals to help him escape from the clutches of the afterlife!

This Kid's Beetlejuice Costume is an officially licensed outfit based on the outfit worn by Beetlejuice in the Tim Burton film. The 3-piece costume comes with a jacket, a pair of pants, and a shirt front with tie. The suit jacket top has a black and white stripe pattern, just like the one Beetlejuice wears. It has a pair of buttons down the front. The pants have the same black and white stripe pattern, and they have an elastic waistband. Finally, the shirt front fits underneath the suit and is designed to look like a white dress shirt. The tie is black and helps pull the whole outfit together! When your child has it on, he can scare the Deetz with some wild antics straight from the underworld!

If your child wants to scare unsuspecting humans, then he's going to want this classic Beetlejuice costume. Be sure to add a wig and makeup kit (sold separately) to get the complete look seen in the image above.