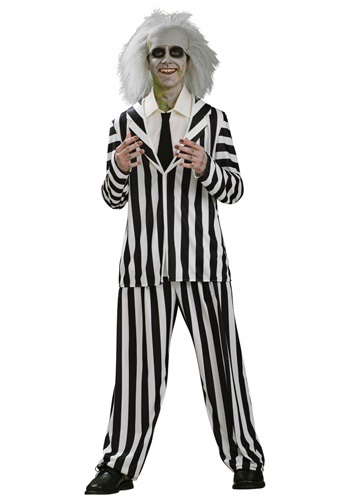 Want to become the ghost with the most? It's not an easy title to achieve. You've got to have some serious spook factor. It's all about treading a thin line, you don't want to go too far. For instance, juggling your own head is too cartoonish. You won't scare anyone, they'll just assume they're hallucinating not seeing a ghost.

Beetlejuice is basically an acrobat when it comes to treading that thin line. He's the snarkiest ghost that anyone has ever met so when he's rising out of the floorboards you're sure to get a completely non-family friendly remark, a rude hand gesture, and the scare of your life! And hey, maybe if you get over that fear you'll want to hang out with this cool ghoul. He's got a laid-back style and he's been around for thousands of years so he's sure to have some interesting things to discuss. We've always been interested in what he was studying in Julliard in the first place. We're guessing it had something to do with gross, ghostly monologues convincing other ghosts to allow them to up their haunted house ante!

You'll feel cool, grungy, and strange in this striped Beetlejuice suit. The pants have an elastic waistline for a comfortable fit. The jacket has a hook and eye tape strip on the front, foam lapels, and a white shirt dickie and black tie. All you need is a gray wig and white, green, and black makeup to make your ghostly look complete. Hey, looks like you just became the ghost with the most!