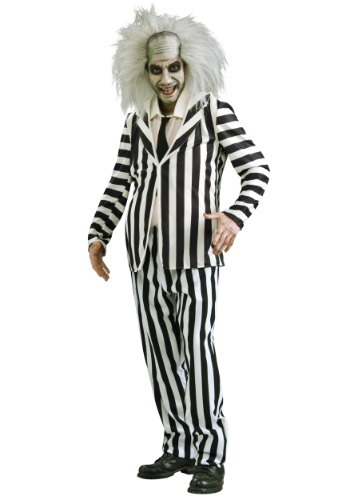 Beetlejuice is kind of sketchy when you think about all the stuff he did in the movie. Even his look is, well, questionable (the guy is technically dead, so we'll give him a slight pass for the rotting flesh look). We guess that is his whole schtick, causing chaos wherever he goes and all of that. Still, Beetlejuice is like the friend you love very much but dread when they pop up unannounced. Our Beetlejuice Plus Size Costume is for you if you are a fan of the creepy crusader or just need a snazzy striped suit.

Ah, darn—we said his name 3 times without even realizing it. Well, we'll start packing. We want to be nowhere around when this guy starts dancing, popping creepy crawlies from the ground and ghosts out of thin air. He is actually a pretty powerful ghost with a reputation even the afterlife is afraid of. The Beetlejuice movie was one of Tim Burton's early projects, and he showed audiences that you can make a wholesome yet scary family film. The movie was before its time, so remind those who forgot by picking up your very own Beetle—oh, you almost got us, by picking up your very own ghost costume.