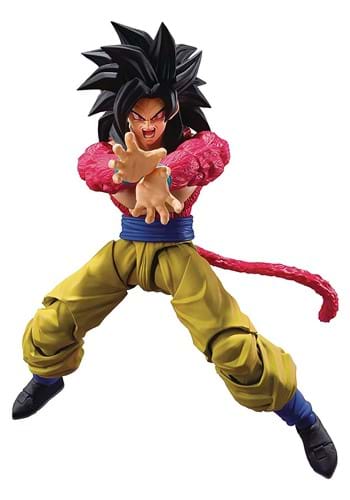 Goku first attained this transformation during the Dragon Ball GT anime series. This was an interesting show as it made Goku a kid again. There tends to be a significant amount of power creep in this show, so making him a kid again made sense. Still, some of the hardcore fans were scared that we would never see a power level/transformation past SS3. Boy, were we wrong! We thought we were in store for something extraordinary when he initially transformed into the golden ape. We were all thinking the same thing; a Super Saiyan ape—holy jeez! Of course, when the transformation continued, and we discovered he was evolving to SS4, we didn't know what to think. Dragon Ball GT gets a bad rap but still has brought us some epic fights, including this one. Suppose you want to show your friends that you are a DBGT enthusiast or looking for something monumental for your office desk. In that case, you need to power up your ki and pick up a Bandai Spirits S.H. Figuarts Dragon Ball GT Super Saiyan 4 Goku Figure before you run out of power!