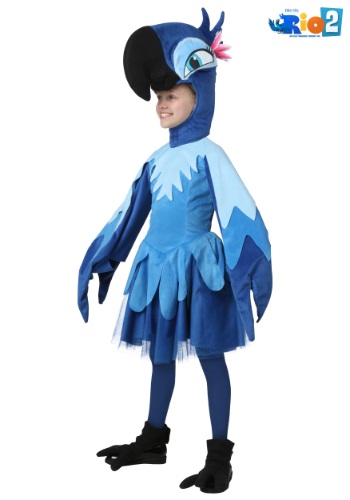 When people hear the name “Jewel,” they think one of two things: either the 90s songwriter who stole America’s heart one folksy hit at a time, or they think of “the gem of the forest,” a big blue bird with a bigger attitude: Jewel from the hit film franchise Rio.

Now, we are guessing that since your child is not a 30-something who remembers the good old day of coffee shop grunge, she’s thinking of the bird when she begs you for a Jewel costume. And we have just the thing for you! This Child Jewel Costume will transform your kid into the silky blue belle of her dreams. In this festive and feathered look, she can teach all the kids in her class how to fly (or samba, if she knows how)--her teacher may think it’s funny to come upon them all saying “I’m not an ostrich,” and flapping their wings, but hopefully the lesson goes better than that hang gliding scene from the film! She can preach (or screech, depending on how “birdlike” she’s trying to be) the importance of freedom and look super-cute, all at the same time.

A pal can dress as Blu and they can be birds of a feather for Halloween, or she can fly solo to a birthday bash in this head-to-talon look. Don’t worry if she can’t teach you to fly on the first try--it always starts out as “falling with style” at the get-go. Now, if she starts ordering dry cappuccinos, wearing flannel, and asking for a guitar, we’ll need to point you a different costume, altogether.