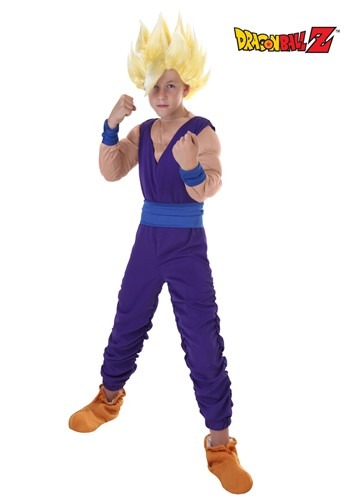 Your little guy just spent a year in a hyperbolic time chamber, did he? And you are telling us that all he did was study math and science while he was in there? Well, we sure that’s what he told you, but by the look of his physique, it seems that he was training for...something different altogether.

We don’t want to tell you what to do or how to parent, but we think your little guy was probably training to fight Cell, the most dangerous being ever known to Earth. And in our opinion, just to boost his morale and his chances for victory (and by proxy, ALL of our chances to survive), you should probably grab him this DBZ Child Gohan Costume. With it, he will feel the strength and power of Super Saiyan Gohan, who also emerged victorious in a very similar battle confrontation. It’s not easy to become a Super Saiyan, but your little guy seems to have achieved it, all while keeping up his grades and household chores. And it’s even harder to defeat Cell, but the weight of the world rests on your little guy’s shoulders--though he seems pretty up to the challenge.

With this outfit--an officially licensed purple sleeveless jumpsuit with elastic for fitting in the legs and shoulders, as well as matching blue armbands and waist sash--your little guy will be flexible, free to move around, and as powerful as a Super Saiyan whose power exceeded that of even Goku, the great planet defender. Just, uhh, you know, do your best to have him home by dinner time. There’s no reason fighting for the fate of Earth should mean he’s late to bed on a school night.