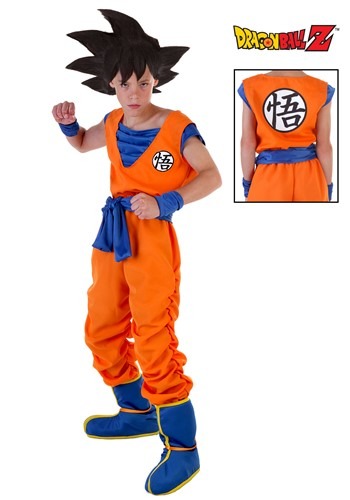 We Need a Hero!

One day, everything's going just fine on Earth. The next, some crazy alien is threatening the entire planet or the God of Destruction himself is pondering the total destruction of the universe. That's when we need one ultra-tough hero with an appetite for justice (and food) to step up. That's when we need Goku!

Part of the Z Fighters, Goku's qualified for any job... aside from driving (he and Piccolo are both terrible drivers). He's strong, he's got some killer martial-arts skills (Kamehameha Wave anyone?), and, really, he's just an all-around nice guy. Oh yeah, and did we mention he can go full Super Saiyan whenever the going gets tough! That means he can go toe to toe with any baddie who shows up on Earth's doorstep.

Of course, Goku didn't start out as a Super Saiyan machine! He had to spend his years training, first with Grandpa Gohan. Then, he trained under Master Roshi. Then, King Kai became his teacher! He's never shied away from a little bit of training, even when he was just a kid and if your child wants to grow up to be just like Goku, then they're going to need to start their training now! They'll need determination, strength, a healthy diet, and, of course, they'll need to don the right gi.

Our DBZ Child Goku Costume ought to be perfect. The costume is officially licensed from Akira Toriyama's anime series. The gi top is orange with a blue shirt inset, and Goku's kanji on the front and back. There's orange pants, blue boot covers, and blue armbands to complete the look. There. Now they look ready to pursue years of intense martial training to become protectors of the planet!... or keep kicking imaginary Frieza in the imaginary stomach. Whatever they prefer.