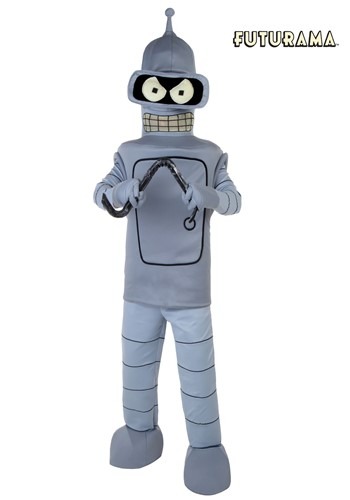 Have you ever wondered if Bender could run on candy instead of... well... his usual "liquid-based" fuel source? It's probably worth running an experiment to find out. And who knows? Maybe it would improve Bender's belligerent disposition... naaahhhh. We wouldn't want that now, would we? We like him just the way he is. Still, there's a way to find out if your favorite robot can indeed run on sugary sweets. It involves literally turning into him... and also getting your neighbors to cough up all of their precious candy! You can make the transformation this Halloween with this exclusive Futurama Teen Bender Costume!

Officially licensed and made by us, this suit will turn your teen into the funniest, crankiest, and most hard-edged cybernetic being ever to come out of Mom's Friendly Robot Company... not to mention the most memorable character on Futurama! It's a head-to-toe set (literally, it includes foam shoe covers so those "human" feet don't show), but the centerpiece of the costume is the tunic -- which includes a headpiece that has one of Bender's classically irascible facial expressions. The mouth is a cleverly disguised screen that allows the wear to see the world... and probably scorn all the non-robots roaming around in it (except for Fry... he's pretty cool).

This Futurama Teen Bender Costume is a surefire Halloween hit with humans and non-humans alike. And if your teen has friends that want to join in on the fun, be sure to have them check out the rest of our Futurama suits and accessories for an awesome group costume!