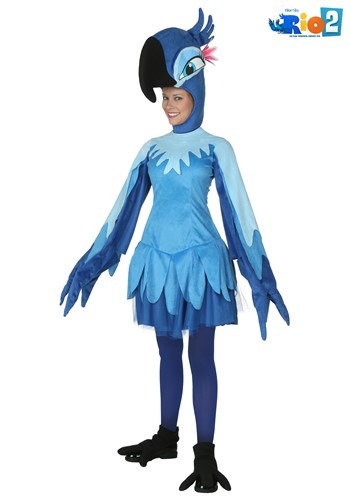 The Freedom of Flight

Birds! Birds need flying. Flying is... err... freedom, and, and not having to rely on anyone. Don't you want that?

Suppose you’re a beautiful creature living in a jungle paradise. You spend your days dancing in the forest without a care in the world... until one fateful day when you’re captured, put in a cage, and introduced to some dork from Minnesota who can’t even fly (let alone do the samba). That’s the pickle Jewel faces in Blue Sky Studios’ hit movie Rio, a story about freedom, love, and slobbering bulldogs.

Known as the “Gem of the Forest,” Jewel may look like a perfect, innocent little thing, but she’s really a sassy little Spix's Macaw under all those shiny cerulean feathers. Little would she know her fiery personality perfectly complemented that of the more (literally) grounded Blu. Jewel would never accept life in a cage, and was horrified to find herself shackled to some fuddy duddy domesticated bird (who had a human friend no less)! Still, over the course of their adventure together, Jewel learned to love the only other member of her species... and even to trust a human or two.

Now, here's the truly great part of the story: if you’re as taken with Jewel as we are, our officially licensed Jewel costume from the Rio series is sure to knock you off your perch. This look is great for a Halloween outing and will be fantastic for any kind of Carnival activity. (Heck, Jewel and Blu's favorite humans even sported a similar look.) This Made by Us costume is a dress with detailed sleeves and a layered skirt designed to look like feathers. The headpiece is Jewel's face, bright eyes, large beak, and a feather top. The set of foot covers give your feet the avian look befitting of such a lovely macaw.

While this costume might not give you the ability to fly—heck, it even took Blu several tries and he had real wings!—it will certainly inspire you to give some great Macaw moves!