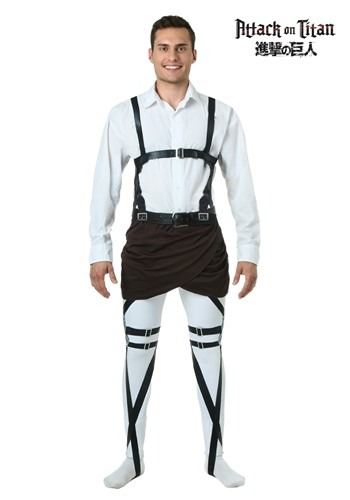 The Attack on Titan universe is one of the most inhospitable ever devised. Can you imagine getting a good sun tan while living next to a 50 meter wall? It would be downright impossible. Do you know how hard it would be to afford enough liquor to stay drunk all day while you’re serving on the Garrison detail? We’re sure they’re not paid a fortune, being drunk all the time and all! And despite their apparent ubiquity, delicious potatoes are impossibly hard to come by thanks to certain naughty thieves. We can’t imagine anything else that could make life harder for one of our favorite bunch of anime characters.

At least there are some perks. Take vertical maneuvering equipment for example: slingshotting around a medieval village like an absolute lunatic looks like the most fun thing on earth. You can’t just tie that kind of firepower around your waist alone, though, or one tow would rip you in half like an overripe guava. You need a harness that distributes the force around your whole body for that. If you’re dressing up as Eren, Armin, or any of the other very short-lived guys from the show, you absolutely can’t do without our Attack on Titan Male Harness.