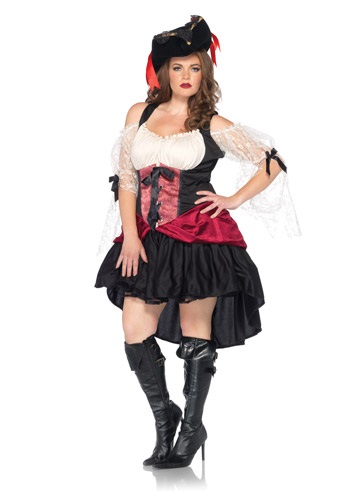 A lot of people might not be able to guess this just by looking at you, but you actually run the largest pirate fleet in all of the Caribbean. From your humble saloon on a small buccaneer island, you coordinate raids on British forts, Spanish armadas, and French trading routes. That’s pretty impressive for someone who doesn’t even go out on a ship all that often. You must have a pretty killer instinct, a pretty…wicked sensibility. So, we think it’s time you embraced that identity a little more and start wearing this Women’s Plus Size Wicked Wench Costume.

This way, when people visit your bar, or see you on the main streets, they know that you’re a force to be reckoned with. They’ll know not to mess with you and not to question your commands. You’re more than just a pirate captain, you’re a Queen! You run the show and in this outfit, no one will ever question that fact.

This commanding and fierce dress is styled as a skirt and corset over a peasant blouse. The skirt and blouse are black and the blouse front is cream colored. The sleeves are lace and the jacquard corset panels are laced with black satin ribbon. For a modern cut and bold look, the skirt has an asymmetric hemline and burgundy velvet panniers at the waist. There’s no better outfit for saying, “I’m the boss here and my laws will be followed.” Now all you need is to accessorize with an enormous pirate hat, one large enough to blot out the sun!

We hear a British ship is headed your way to try to bring you down. What a joke. There’s no stopping you, especially now that you look so fierce and ruthless. Command your fleet, Queen, bring down that royal annoyance and send a message that this part of the sea belongs to you and you alone!