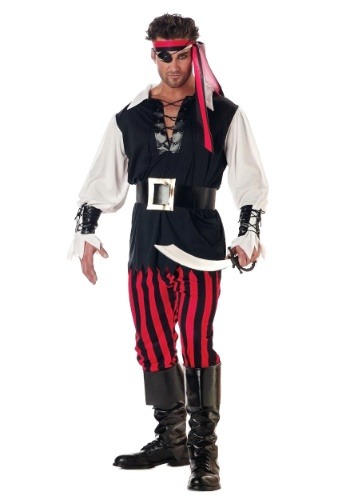 A RUGGED LIFE OF PLUNDER AND RUM?

In a world where the humdrum of daily work and obligations are as sure as the rising and setting of the sun, it can sure become daunting to think that tomorrow is just going to be the same thing you just finally finished.  Where's the adventure?  Where's the risk?  And, of course, where is the surprising grandiose reward?  Failing that, how about at least a good rum and a sea shanty!?

Okay, perhaps some of those are rather specific requests, but now that we bring it up, isn't the idea of setting off to the high seas for a grand adventure just the thing that would cure those day-in and day-out blues?  Well, if nothing else, the excitement of a few cutlass fights or a round or two of gambling at the table of the pirate king would make for a crazy story to tell the folks at the water cooler!

Whether you're actually going to set off into the sunset or not, you should at least take the opportunity to slide yourself into this astounding Men's Cutthroat Pirate Costume and get that vicarious thrill for a night!  This studly regalia includes a brilliantly constructed shirt that gives the look of a pirate peasant shirt and a black faux leather tunic.  The cinched sleeves and faux leather wrist cuffs give that manly look while the cropped red and black striped pants scream pirate even louder than your terrified onlookers will!

TIME TO GET YOUR PIRATE BOOTY

Now, we're not saying that you'll definitely find treasure and get your hands on a life-changing pirate booty once you deck yourself out in this rugged pirate regalia, but we are saying that your own pirate booty is going to be having the time of its life when you hit the night and start belting out your shanties!