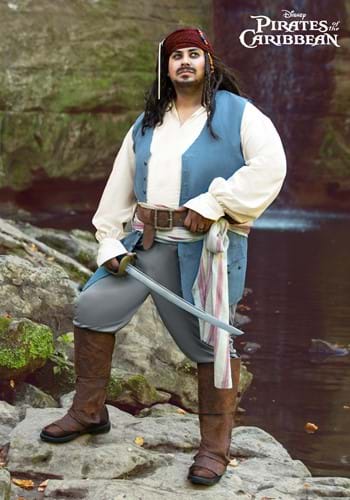 You've probably heard a ton of pirate tales throughout the years. How many sailors have met Davy Jones or sailed beyond the seven seas? (You know there are actually around fifty of them out there, right!?) There are stories of buried treasure, mysterious sea creatures, and curses that any pirate who has seen a peg-leg knows to shiver their timbers over. None of that is too surprising. But how many pirates have done it all? Been everywhere? Seen everything!? That's right. There's only one genuine pirate king that can claim that kind of prize. And now it is time for you to take a walk in his boots!

Step into your next great adventure with our exclusive Plus Size Captain Jack Sparrow costume from Disney's Pirates of the Caribbean. Your tale begins with a pair of gray pants and an ivory pirate shirt, but you'll really step into character thanks to the Jack Sparrow costume accessories. The blue vest with metallic buttons gives Jack his panache and a highly decorated brown belt and sash brings in the swagger. Brown boot tops and a red bandana complete the look, though if you aren't rocking some natural pirate locks, be sure to upgrade your 'do with a Jack Sparrow wig.