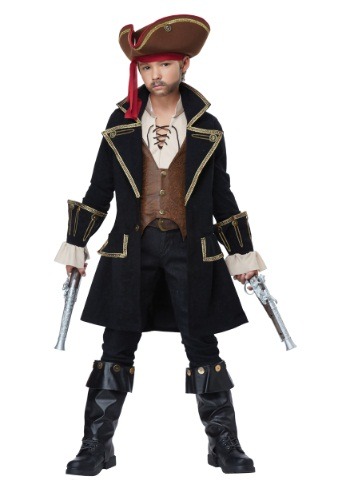 Halloween might be a tough time for a pirate. First off, all of the traveling is done on foot. That means that this poor pirate will have to leave their ship in the port just to come and trick or treat! Since you can't leave a ship alone, that means that a few poor pirates would have to stay behind and miss the festivities.

That being said, we aren't sure that many old pirates would really enjoy the festivities. Imagine being a pirate from the 1600's and walking into our present-day world on Halloween. Costumes would have improved so much since their time, they probably wouldn't be able to tell that they are all costumes, which would cause them quite a fright! Sure, they'd see some other pirates out and about, but since these pirates are only people in costume, they might not even be able to understand the old pirate's lingo. Aye, Halloween would be a tough time for pirates, all the way around.

This costume comes with all you will need to turn into a seafaring scallywag! This costume starts with the shirt front, to be worn under the jacket/vest combo! Having these three things put together in such a fashion makes this costume easier to put on and less bulky for your child! For their head, we have included two things. The first is the thin red tie, over which they will be wearing a brown tricorn hat! This combination is a classic pirate look. The final piece of this costume is the boot covers, which will turn your land-loving legs into seafaring ones!

When you become a pirate captain, this means you have a ship to captain. And if you already have a ship, we hope you have a name for it! You don't? Oh boy. Here, we can help. Take your favorite color, and then add your favorite animal. Our ship would be called the teal flamingo. Not the toughest name, but it's better than nothing. Hope this helps, good luck!