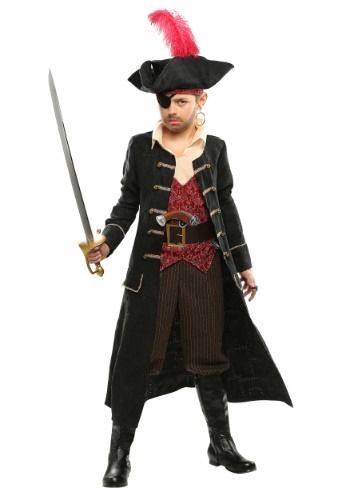 Every ship needs a good captain. If there is no captain, everyone would be running around in chaos, not knowing what to do. There would be disorganization. Disorder. Discord. Crewmates will be fighting over what to do and who should do it. That's why there needs to be a strong leader in place to call the shots so the whole crew can work as a team.

What? You can't deny that a captain needs to look like a captain! How else is the crew supposed to take the captain seriously? A good set of threads lets everyone know who's in charge. For instance, if you have a wannabe captain on hand, put them in this Ship Captain costume. This 100 percent polyester costume has a long jacket with decorative buttons and faux pockets. It has elastic-waisted pants and a faux button. There is a vest with attached shirt collar and a hat with wire brim and feather. There's a belt with metal buckle and a head-scarf to boot. Essentially, this outfit has everything a person might need for looking like a proper captain.

Seriously. Try it. Have your captain-in-training put on this outfit and watch what happens. We bet they'll stand a little taller, strut out their confidence. And most importantly? No one on the crew is going to question what they say. See? We're telling you: a good pair of threads makes the captain.