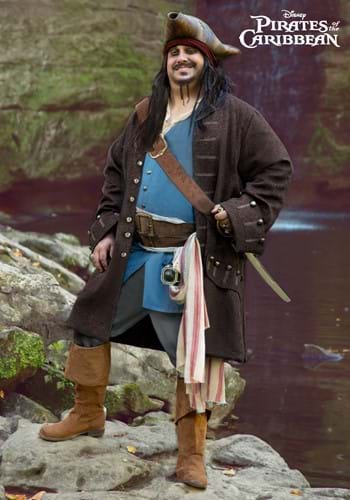 It requires courage. It requires a taste for adventure. It requires skill with both sword and wit. Yes, to be captain of the Black Pearl, you must be a pirate of the highest caliber, like the one and only Disney's Captain Jack Sparrow. He's sailed that ship through some of the most dangerous seas in the world and he'll keep doing it if there's a new adventure to be had!

Do you thirst for adventure? Do you want a ship of your own to command? Well then, it's about time that you got the proper look of the world's most infamous pirate with this Plus Authentic Captain Jack Sparrow Costume.

This exclusive costume is officially licensed from Disney's Pirates of the Caribbean. It goes to great lengths to capture the style of Captain Jack Sparrow's outfit from the movies. It comes with a simple white shirt and a blue vest that fits with buttons. The long coat, complete with decorative accents on the cuffs and pockets, fits over top. The brown pants fit with buttons and also feature pockets. The costume also comes with a fabric waist sash and faux leather belts, one of which acts as a sword holster. Finally, the ensemble is topped off with a red headscarf. The entire ensemble comes together for a look that's worthy of the most notorious pirate captain on the high seas!