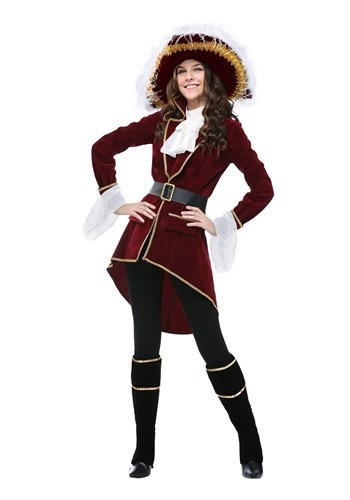 BEING A PIRATE CAPTAIN

Being a pirate captain is no easy task. Sure, it sounds like all adventure and fun, but there are a lot of challenges too. For one, you have to try to hold the respect and friendship of your crew. This is tricky. On one hand you want to be their friend and be able to play cards with them each night, but on the other hand, you need them to have a healthy respect for you, and you need them to listen, even when you have to make decisions that they don't like.

Being their friend and captain isn't easy. The second you get too friendly is the second that they stop listening to you, and that can be very frustrating. So, what are you to do about it? How do you get this ragtag bunch of scallywags to like you AND listen to you?

This costume is the first step to becoming a pirate captain. Now all you'll need is a crew! And a ship... You've got a ways to go. This costume is styled to look like the fearsome captain hook and sports a maroon jacket with gold accents. Under the jacket, you'll be wearing a white scarf. Over the jacket, you'll be wearing a black belt with a gold buckle. For your legs, we've included boot toppers to turn any shoes into seafaring ones, and for your head, we have included the iconic tricorn hat. This hat is lined with white feathers, giving it a sense of luxury that only Captain Hook could afford.

The Captain's secret to keeping a crew disciplined is simple. If they do something bad, they walk the plank! Don't worry, you don't have to kill them if you don't want to, you could always throw a rope out for them to climb if you want to. But, your point will have been made!